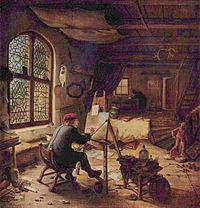 A studio is a place where an artist can work. Studios can be used for many things, such as photography, broadcasting, painting, making movies, television shows, cartoons, or music. The word comes from the Latin word, studium, which means to study.

A movie studio is where movies are made and produced. It can be indoors, outdoors, or both.

A television studio is where video production takes place. It usually contains cameras, microphones, speakers, and spotlights. It is similar to a movie studio.

A recording studio is used for recording music, speech, or other kinds of sound. They are typically divided into three areas: an "isolation room" that has soundproofing for playing instruments and to prevent echo, a "live room" for general recording, and a "control room" to store the recording equipment that DJ's use.