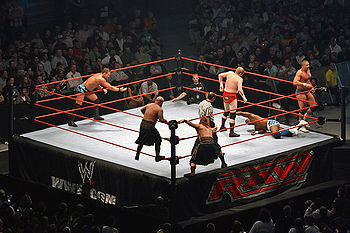 Action in a triple threat tag team match for the WWE World Tag Team Championship. Shelton Benjamin (on the mat) from The World's Greatest Tag Team has been stuck in the corner of champions Cade and Murdoch, away from his partner Charlie Haas; both of these teams can tag in the third team, The Highlanders.

In professional wrestling, a tag team is a team of two wrestlers who are working together as a team (more than two is called a stable). Most of the time they are close partners and backstage friends who team with each other almost all the time, while other times they are wrestlers that fight by themselves most of the time who team together for just one match.

They usually wrestle against the same number of other wrestlers on the other team or teams, however in the occasional "handicap match" there may be more wrestlers on one team then the other, for example André the Giant often wrestled against two or more opponents.