Jeffrey Nerro Hardy (born August 31, 1977) is an American professional wrestler, painter and musician. He is currently signed to WWE.

Hardy says that Sting, The Ultimate Warrior, and Shawn Michaels were the reasons why he wanted to get into wrestling as a child.[1] Jeff had been seen on WWF television as early as age 16. His first WWF match was against The 1-2-3 Kid and came on May 25, 1994 in Erie, Pennsylvania.[2] Early on, Jeff, along with his brother Matt and friends, started their own wrestling organization, the TWF (Trampoline Wrestling Federation).[3] In it they would perform many of the moves they saw on TV.[4] The federation eventually became a part of a county fair in North Carolina, U.S.. Jeff, Matt, and friends then began to work for other independent wrestling companies. They drove all over the East Coast of the United States, working for companies many small companies.

The Hardy brothers eventually caught the eyes of the World Wrestling Federation. Jeff was only 16 at the time. After being signed to a contract in 1998,[4] they were trained by Dory Funk, Jr. in his Funkin' Dojo. They were trained with other notable wrestlers such as Kurt Angle, Christian, Test, and A-Train. When the team was finally brought up to WWF TV, they formed the tag team called The Hardy Boys. During this time, they were managed by Michael Hayes. In 1999, they fought mainly with Edge and Christian.

The team of Matt and Jeff won the WWE Tag Team Championship six times. Because of this, they would be known as one of the most successful tag teams in WWE history. In 2000, Matt and Jeff found a new manager in their real-life friend Lita. Together, the three became known as "Team Extreme".

Jeff was well known for his high risk stunts in many of the Hardy Boys' matches. He made a name for himself because of the risks he took during this time. In 2001, Jeff would also hold the WWE Intercontinental, Light Heavyweight and Hardcore Championships.

After years in the tag team division, Jeff fought The Undertaker in a Ladder match for the Championship. Jeff did not win, but earned the Undertaker's respect. Jeff competed for singles titles several times, but did not win.

Jeff was released from WWE on April 22, 2003. The reasons given for the release were Jeff's strange behavior, drug use, and not showing up for matches.[5][6] Hardy also said "burn out" and the need for time off were reasons for leaving WWE.[1]

Hardy started wrestling in Total Nonstop Action Wrestling on June 23, 2004 at the TNA pay-per-view, the Second Anniversary Show. He was in a match against A.J. Styles for the X - Division title. The match ended in a no-contest when Kid Kash and Dallas interfered. Hardy returned to TNA on July 21 and was given a chance to fight for the NWA World Heavyweight Championship. Hardy challenged for the title on September 8 but lost to NWA World Heavyweight Champion Jeff Jarrett.

Jeff Hardy, at WrestleMania 23, preparing to hit a leg drop off a ladder onto Edge through another ladder

On the November 21 episode of Extreme Championship Wrestling Jeff teamed with his brother Matt for the first time in almost five years to defeat the Full Blooded Italians.

With Jeff Hardy still feuding with John Morrison in 2007, Jeff was challenged once again by John Morrison at New Year's Revolution 2007 for the Intercontinental Championship. Hardy once again defeated Morrison. Hardy later lost the title to Umaga. On the September 3 edition of RAW, Jeff successfully captured his 4th WWE Intercontinental Championship by defeating Umaga for the title. At Armageddon 2007, Hardy will fight Triple H, with the winner getting a WWE Championship match at the Royal Rumble. This match was seen to many as the most important match of Hardy's career, as his win against Triple H has finally moved Hardy into the top level of the roster and the race for the WWE Championship. However, he lost to Randy Orton at the Royal Rumble. He will fight in the Elimination Chamber at No Way Out on February 17th for a place in the main event at Wrestlemania.

Jeff Hardy came second in the Elimation Chamber match, being beaten by Triple H. He has competed in various matches and was going to WrestleMania XXIV to fight in the Money in the Bank ladder match. Jeff lost the Intercontinental Championship to Chris Jericho on the March 10 edition of RAW. The next day, it was confirmed that Jeff Hardy had been put on 60-day suspension, as he failed his second drug test. This meant that he did not compete at WrestleMania.

Jeff Hardy returned in the May 12, 2008 edition of RAW, when General Manager William Regal told him he was to pay for his "sins" (read the paragraph before) by fighting Umaga. Jeff Hardy won with a "Whisper in the Wind".

On December 14, 2008 at Armageddon, he won the WWE Championship, his first world championship. During the next month, Hardy had several accidents, including a car accident and a pyrotechnics accident. Hardy's brother, Matt was revealed as the person behind the accidents, and interfered in his match at the Royal Rumble, causing Hardy to lose the WWE Championship to Edge. Matt defeated Hardy in an Extreme Rules match at WrestleMania XXV, but Hardy defeated Matt in an "I Quit" match at Backlash. At WWE Extreme Rules, Hardy defeated Edge in a ladder match to win the World Heavyweight Championship, but lost the championship immediately after wards to CM Punk, who cashed in his Money in the Bank briefcase. He then was in a two-month feud with CM Punk. Ultimately, he lost when he entered a Loser Leaves Town Match in a steel cage. 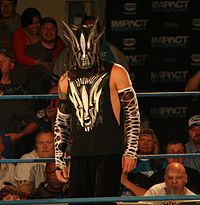 Hardy returns to TNA on January 4, 2010. On March 8th, he saves Hulk Hogan And the pope D'Anglo Dinero. He returns when he defeats then TNA World Heavyweight Champion AJ Styles in a non-title match. On April 4th, he was revealed as part of Hulk Hogan's team for Lockdown. 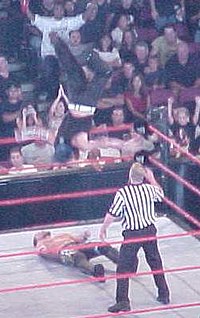 Jeff Hardy performing his Swanton Bomb on Chris Jericho in 2002 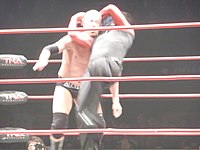 Jeff Hardy performing his Twist of Hate on Mr. Anderson in 2011 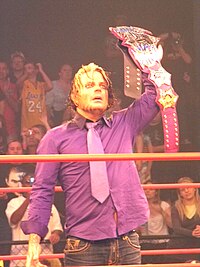 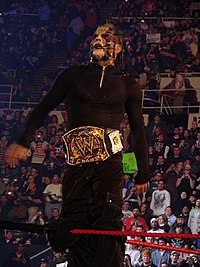 Hardy during his time as WWE Champion 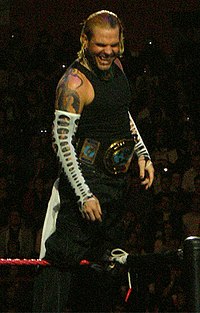 Hardy during his time as WWE Intercontinental Champion