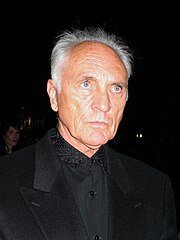 Terence Henry Stamp (born 22 July 1938) is a British movie, voice, television, and stage actor who has appeared in over 100 movies such as; The Adventures of Priscilla, Queen of the Desert, Superman II, Get Smart,The Haunted Mansion, Star Wars Episode I: The Phantom Menace, Valkyrie, Yes Man, and Wanted. Stamp has been awarded a Golden Globe Award, Silver Bear Award, and a Satellite Award. He has acted in over 100 films.

Stamp was born in Stepney, London.[1][2] In the 1960s he and supermodel girlfriend Jean Shrimpton were one of the most photographed couples of the day. Another of his famous girlfriends was Julie Christie. Later, Stamp became a follower of Bhagwan Shree Rajneesh, and lived for a while at the latter's ashram (~estate) in Poona.[3]