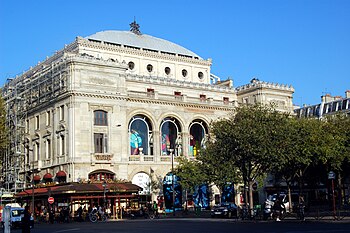 The Théâtre du Châtelet is a theatre and opera house in Paris seating 2,500 people. It was designed by Gabriel Davioud. It was built between 1860 and 1862. It was named the Théâtre Impérial du Châtelet. It was built on a site where a châtelet (small castle) once stood. The theatre has undergone remodeling and name changes over the years. The theatre sits on the Place du Châtelet facing the Théâtre de la Ville. At the centre of the plaza is a fountain. It was erected in 1808. It commemorates Napoleon's victory in Egypt.

The Théâtre du Châtelet was originally used for drama performances. In April 1876, the stage version of Around the World in Eighty Days began a run spanning sixty-four years and 2195 performances. The theatre was used for operettas, variety and ballet performances, and for concerts. It was also, for a time, a movie theatre. Petrouchka premiered in the theatre on 13 June 1911, and Parade on 18 May 1917. Tchaikovsky, Mahler, and Richard Strauss made appearances here.

The theatre has been operated by the City of Paris since 1979. It has undergone a major restoration. It re-opened under the name of the Théâtre Musical de Paris in 1980. It was acoustically re-modeled again in 1989. It returned to the Théâtre du Châtelet name. In 1995, the theatre received additional improvements in acoustics and sightlines. Today, the theatre is mainly used for opera performances and concerts.