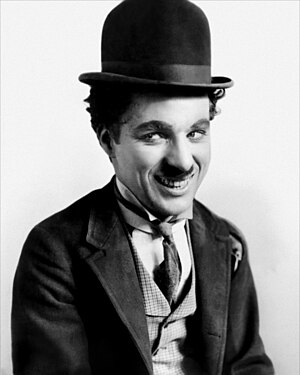 Chaplin as the Little Tramp

File:The Gold Rush (1925).webm The Gold Rush is a 1925 silent movie. It was written, directed, and produced by Charlie Chaplin. He stars in the movie, too. The movie is set in the Yukon during the Klondike Gold Rush. Chaplin plays the Little Tramp. It was a character he created. The Little Tramp appeared in many Chaplin movies. In this movie, the Little Tramp has many adventures with other prospectors. He falls in love with a saloon girl. Critics liked the movie. One critic wrote, "Here is a comedy with streaks of poetry, pathos, tenderness, linked with brusqueness and boisterousness. It is the outstanding gem of all Chaplin's pictures, as it has more thought and originality than even such masterpieces of mirth as The Kid and Shoulder Arms."[1] In 1992 The Gold Rush was selected for preservation in the United States National Film Registry. Chaplin hoped that people would remember him for this movie.[2]