Theodor Fontane (IPA: [ˈtʰeodoɐ̯ fɔnˈtaːnə]; 30 December 1819 – 20 September 1898) was a German novelist and poet, regarded by many to be the most important 19th-century German-language realist writer.

Fontane was born in Neuruppin into a Huguenot family. At the age of sixteen he became apprentice in a pharmacy and then a pharmacist himself (like his father). In 1839, at the age of 20, wrote his first work (Heinrichs IV. erste Liebe, now lost). His first published work, the novella Geschwisterliebe (or "Sibling Love"), appeared in the Berlin Figaro in December 1839.[1]

His first job as apothecary was in Dresden after which he returned to his father's shop, now in the provincial town of Letschin in the Oderbruch region. In this time Fontane published articles in the Leipzig newspaper Die Eisenbahn (railway) and translated Shakespeare. In 1843, he joined a literary club called Tunnel über der Spree (i.e. Tunnel over the river Spree) in Berlin where he came into contact with many of the most important German writers such as Theodor Storm, Joseph von Eichendorff and Gottfried Keller. 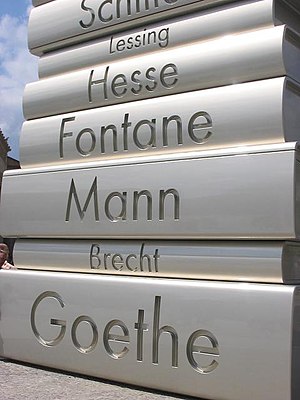 "Modern Book Printing" from the Walk of Ideas in Berlin, Germany - built in 2006 to commemorate Johannes Gutenberg's invention, c. 1445, of movable printing type.

In 1844 Fontane enrolled in the Prussian army and set out on the first of many journeys to England. There he learned about old English ballads. Soon afterwards he wrote ballads himself. At that time he became engaged to his future wife, Emilie Rouanet-Kummer, whom he had first met when still at school.

He was - very short - enganged in the revolutionary events of the revolution of 1848. In 1849 he quit his job as an apothecary and became a full-time journalist and writer. In order to support his family he took a job as a writer for the Prussian intelligence agency Centralstelle für Preßangelegenheiten which was meant to influence the press towards a German national cause. Again he specialised in British affairs, and the agency sent him as correspondent to London for a couple of years. His wife and two sons followed him there. While still in London he quit his government job and, on his return to Berlin, became editor of the conservative Kreuzzeitung (newspaper).

His books about Britain include Ein Sommer in London (1854); Aus England, Studien und Briefe (1860) and Jenseits des Tweed, Bilder und Briefe aus Schottland (1860). At the period, and following the fashion of Walter Scott, traditional British stories were still en vogue on the continent. His Gedichte (1851) and ballads Männer und Helden (1860) tell of Britain's glories in days gone by.

Back in Germany, Fontane became particularly interested in the Mark Brandenburg region. He was especially proud of its past achievements and delighted in the growth of its capital city, Berlin. His fascination with the countryside surrounding Berlin may be seen in his delightfully picturesque Wanderungen durch die Mark Brandenburg (1862-1882, 5 vols.).

In 1870, he quit his job at the Kreuzzeitung and became theater critic for the liberal Vossische Zeitung (newspaper). This job he kept until retirement. He had already written about Prussia's war against Denmark and the Austro-Prussian War. Then he went to write about the Franco-Prussian War in 1870 and was taken prisoner. He remained in French captivity for three months. His experiences there are set down in Kriegsgefangen Erlebtes 1870 (1871); subsequently he published his observations on the campaign in Der Krieg gegen Frankreich 1870-71 (1874-1876).

At the ripe age of 57 Fontane finally took to what he would be remembered for, the novel. His fine historical novel Vor dem Sturm (1878) was followed by a series of novels of modern life, notably L'Adultera (1882), a book about adultery which was considered so risqué that it took Fontane two years to find a publisher. In his novels Frau Jenny Treibel, Irrungen, Wirrungen, and Effi Briest (1894), he found his very own tone, he wrote about insights into the lives of the nobility as well as the "common man"; his achievement there was later described as poetic realism. In Der Stechlin (1899), his last finished novel, Fontane adapted the realistic methods and social criticism of contemporary French fiction to the conditions of Prussian life.