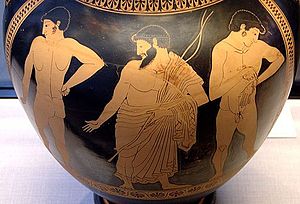 Two boxers and a trainer

Theogenes was one of the greatest athletes in Ancient Greece. He was born in the city of Thasos on the island of the same name in the Aegean Sea in the early fifth century. He was a boxer and a pankrationiast.[1]

It is certain that Theogenes was worshipped as a god in Thasos after his death. One of his enemies whipped his statue. It fell and crushed him to death. The people of Thasos threw the statue into the sea. It was stained with blood. The fields did not produce after this act. The people of Thasos pulled the statue from the sea and put it back in its place. Worship continued. Theogenes was said to heal diseases.[2]