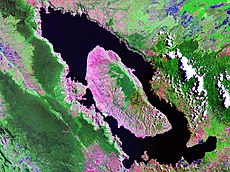 Satellite image of Lake Toba: 100km long and 30km wide. The lake is the caldera of a supervolcano 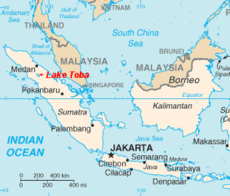 The Toba catastrophe was the largest volcanic eruption in the last 2.6 million years. It is called a catastrophe because its effects may have damaged the human species.

Lake Toba in Sumatra, Indonesia, is the site of a supervolcanic eruption that occurred 73,000 (±4000 years) years ago.[1][2][3][4] It was a climate-changing event. The eruption was two orders of magnitude (= x100) larger than the largest known historic eruption, that of Tambora, also in Indonesia.[2]

This eruption was the last and largest of four eruptions of Toba during the Quaternary epoch. It had an estimated Volcanic Explosivity Index of 8 (described as "apocalyptic"). It made a sizable contribution to the 100x30 km caldera complex. The mass it threw out was 100 times greater than the largest volcanic eruption in recent history. That was the 1815 eruption of Mount Tambora in Indonesia, which caused the 1816 "Year Without a Summer" in the northern hemisphere.[5]

The eruption of Toba led to a volcanic winter with a worldwide decline in temperatures between 3-5 degrees C, and up to 15 degrees C in higher latitudes.[6]

According to the Toba catastrophe theory,it had global consequences, killing most humans then alive and creating a population bottleneck in Central Eastern Africa and India that affected the genetic inheritance of all humans today.[6][7]

According to the theory, only 10,000 (perhaps only 1,000) pairs of humans survived the disaster. Perhaps it led to the other hominids becoming extinct, though the Neanderthals certainly survived in Europe and Eurasia.

There is no direct evidence that the theory is correct. And there is no evidence for any other animal decline or extinction, even in environmentally sensitive species.[8] There is evidence that human habitation continued in India after the eruption.[9] The theory in its strongest form seems to be incorrect.