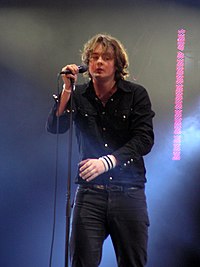 Thomas "Tom" Oliver Chaplin (born 8 March 1979) is the singer of the rock band Keane. He comes from Battle, East Sussex.

He went to Tonbridge school with his friend Tim Rice-Oxley. There they met Richard Hughes and Dominic Scott. He was invited to join the band in 1997, when the name "The Lotus Eaters" was changed to "Cherry Keane".

When the band moved to London trying to get a record deal, Tom left his Art History studies at the Edinburgh University in 1999 to join the band. With Scott in the band as the lead guitarist, Tom played the acoustic guitar. After Scott left in 2001, he took the lead vocals, but also plays the keyboard on some songs. Since Scott left, the band has not used guitars, with their first album using only keyboards, drums and vocals.

Chaplin also took part in Band Aid 20's re-recording of Do They Know It's Christmas in November 2004.