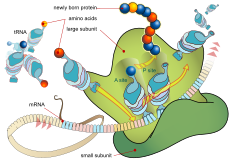 Translation is the second part of protein biosynthesis (the making of proteins). It is part of the process of gene expression.

Amino acids are carried by specific tRNAs with anticodons to connect with mRNA's matching codons. Each tRNA has its own anticodon and carries an amino acid. An anticodon is always together with the same amino acid.

So, a ribosome works a lot like a stock ticker and ticker tape. Many ribosomes, together with mRNA, will attach themselves to the outer membrane of the rough endoplasmic reticulum. Any proteins that those ribosomes make go into the inside of the endoplasmic reticulum, where it will probably go into a vesicle later. The vesicles will then bring the proteins to other organelles or even the outside of the cell. 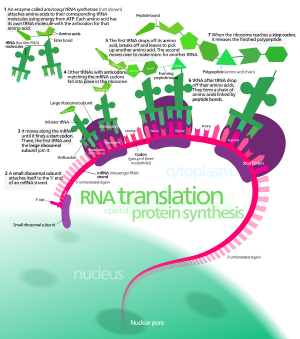 Overview of the translation of eukaryotic messenger RNA