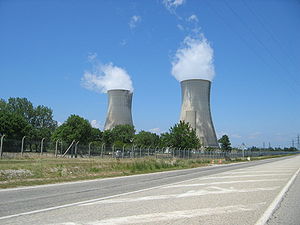 The cooling towers of Tricastin

Tricastin is a nuclear power plant in France. It has 4 reactors, which each generate 915 MW, for a total of 3.6 TW. It is next to the highway, about halfway between Valence-sur-Rhône and Avignon. It is on the River Rhône. It was built form 1974 to 1981; the first reactors started working in 1980. It has been criticized several times, because of incidents: