The Trojan Horse is a large wooden horse from the Trojan War in Greek mythology. In the Trojan War, the Greeks were fighting against the city of Troy. The war started when Helen, the queen of Sparta, was kidnapped by Paris, prince of Troy. The Greeks waged war on Troy to win Helen of Troy back.

The Greeks could not enter the city or win the war. Because of this, Odysseus, one of the Grecian leaders, thought of a way to trick the Trojans. The Greeks built a large wooden horse out of a ship and left it outside the gates of the city as a present for the Trojans, then sailed away. The Greek ships hid behind a nearby land mass. The Trojans took the horse and put it inside their city, thinking it was a victory gift from the Greeks. The Trojans had a festival to celebrate their victory. Odysseus chose a horse so that Athena (goddess of wisdom and strength) would grant them good luck after the battle. After the Trojan victory festival ended, the Greeks, who were hiding inside the horse, came out. They opened the city gates to let the other Greeks enter Troy. The Greeks easily overpowered the unsuspecting Trojans and took control of the city. Because of the Trojan Horse, the Greeks won the Trojan War. 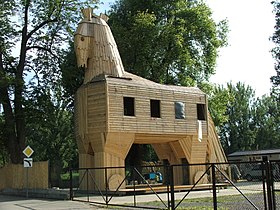 Today the word "Trojan horse" is used for things that are similar to that story: something that looks good, but in truth has another purpose, usually bad. An example for this is a type of computer virus called a Trojan horse.