KidzSearch Safe Wikipedia for Kids.
Jump to: navigation, search
This is the page about Tropical Storm Arthur in 2002. There was another tropical storm that was named Arthur in 2008. 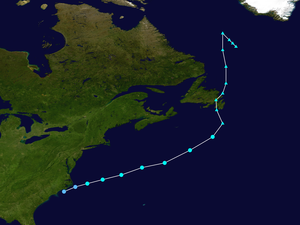 On July 9 a low-level circulation started. It moved very slowly northwest and did not become a tropical depression. The low-level circulation moved ashore in Florida. Early on July 14 the low entered the Atlantic Ocean. Clouds around the low started growing. Late on July 14 the low became Tropical Depression One, while it was 45 miles south of Hatteras, North Carolina. On the morning of July 15 it became a tropical storm and was called "Arthur". Arthur slowly got stronger until July 16 when it reached its highest winds, which were at 60 miles per hour. Wind shear caused Arthur to die shortly later. The extratropical low was last seen on July 19 while it was near Greenland. [1]