Bermuda (/bɜrˈmjuːdə/ "Ber-myu-dah"; officially, the Bermudas or Somers Islands) is a British overseas territory in the North Atlantic Ocean. The land has one main island and 180 smaller islands. Bermuda is a popular tourist place, with mild weather during the winter months.

Off the east coast of the United States, Bermuda's nearest landmass is Cape Hatteras, North Carolina, about 1,030 kilometres (640 mi) to the west-northwest. It is about 1,373 kilometres (853 mi) south of Halifax, Nova Scotia, Canada, and 1,770 kilometres (1,100 mi) northeast of Miami, Florida. Its capital city is Hamilton. 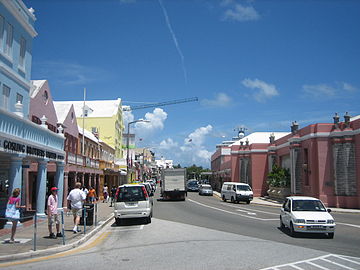 Street in Hamilton (the capital city).

Bermuda was discovered in 1505 by Spanish navigator Juan de Bermúdez (who said it to be inhabited only with pigs), after whom the islands are named. Bermúdez claimed it for the Spanish Empire. Unoccupied, the island was settled by England in 1609, making it the oldest and most populous remaining British overseas territory. Its first capital, St George's, was founded in 1612 and is the oldest continuously inhabited English town in the Americas.[4]

The country is in the Atlantic Ocean, near the western edge of the Sargasso Sea. It is about 580 nautical miles (1070 km, 670 mi) east-southeast of Cape Hatteras on the Outer Banks of North Carolina and about 590 nautical miles (1100 km, 690 mi) southeast of Martha's Vineyard. The island is due east of Fripp Island, South Carolina. It has 103 km (64 mi) of coastline.

The territory has 181 islands. The total area is 53.3 square kilometres (20.6 sq mi). The largest island is Main Island, sometimes itself called Bermuda.

Bermuda has a subtropical climate.[5] The weather is humid and, as a result, the summertime heat index can be high, even though mid-August temperatures rarely exceed 30 °C (86 °F). Winters are mild, with average daytime temperatures in January and February around 20 °C (68 °F). The temperature rarely drops below 10 °C (50 °F).

Bermuda is very likely to be affected by hurricanes. The island's small size means that direct landfalls are rare. The last hurricane to cause significant damage to Bermuda was category 3 Hurricane Fabian on 5 September 2003.

The only source of fresh water in Bermuda is rainfall. It is collected on roofs and catchments and stored in tanks. Each home usually has at least one of these tanks forming part of its foundation.

When discovered, Bermuda had no people. It was mostly covered by forests of Bermuda cedar, with mangrove marshes along its shores. Only 165 of the island's current 1000 vascular plant species are considered native. Of those 15, including the cedar, are endemic.

Many species of palm trees have been introduced to Bermuda. Coconut palms grow there, making it the furthest north place for the natural growth of this species. While coconuts grow on Bermuda, the lack of heat does not usually let them properly set fruit.

The only indigenous mammals of Bermuda are five species of bats. All of these bats are also in the eastern United States — Lasionycteris noctivagans, Lasiurus borealis, Lasiurus cinereus, Lasiurus seminolus and Perimyotis subflavus.[6] Other commonly known fauna of Bermuda includes its national bird, the Bermuda Petrel, and the Bermuda Rock Skink. The skink was long thought to have been the only indigenous land vertebrate of Bermuda. It has recently been discovered, however, that a species of terrapin predated the arrival of humans on the archipelago.

Bermuda is divided into nine parishes and two municipalities.

Bermuda has a wealthy economy, with finance as its largest sector, followed by tourism.[4][7] In 2005, Bermuda was even claimed to have the world's highest GDP per capita, yet these statistics are hard to verify as Bermuda is not classified as a country but rather as a territory of the U.K. 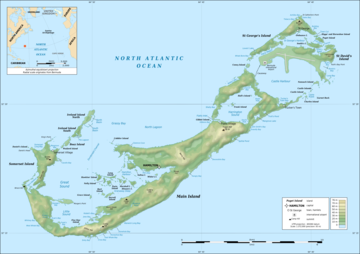 Map of Bermuda, showing many of the islands (right-click map to enlarge).

One of Bermuda's pink sand beaches, at Astwood Park

Bermuda's pink sand beaches and clear, cerulean blue ocean waters are popular with tourists. Many of Bermuda's hotels are along the south shore of the island. In addition to its beaches, there are a number of sightseeing attractions. Historic St George's is a World Heritage Site. Scuba divers can explore many wrecks and coral reefs in shallow water (typically 30–40 feet (9.1–12.2 m) in depth) with nearly unlimited visibility. Many nearby reefs are easy to access from shore by snorkellers, especially at Church Bay.

Bermuda's most popular visitor attraction is the Royal Naval Dockyard. It includes the Bermuda Maritime Museum. Other attractions include the Bermuda Aquarium, Museum and Zoo,[8] Bermuda Underwater Exploration Institute, the Botanical Gardens, lighthouses, and the Crystal Caves with its impressive stalactites and underground saltwater pools.

It is not possible to rent a car on the island. However, visitors can hire motor scooters for use as private transport, or use public transport.

Bermuda has produced, or been home to, actors such as Oona O'Neill, Earl Cameron, Diana Dill, Lena Headey, Will Kempe, and most famously, Michael Douglas and Catherine Zeta-Jones. Other movie and television personalities who were born, or have lived, in Bermuda include producer Arthur Rankin, Jr., and cartoonist and Muppet man Michael Frith.

Music and dance are important in Bermuda. Noted musicians have included local icons The Talbot Brothers, who performed for many decades both in Bermuda and the United States, and were on Ed Sullivan's televised variety show. Other musicians are jazz pianist Lance Hayward, singer-songwriter Heather Nova and her brother, Mishka, tenor Gary Burgess, classical musician and conductor Kenneth Amis, and more recently, dancehall artist Collie Buddz.

Bermuda's national cricket team was in the Cricket World Cup 2007 in the West Indies. Their most famous player is Dwayne Leverock. Also very well known is David Hemp. The yearly "Cup Match" cricket tournament between rival parishes St George's in the east and Somerset in the west is the time for a popular national holiday.

In 2007 Bermuda hosted the 25th PGA Grand Slam of Golf. The event returned to Bermuda again in 2008 and 2009. Bermudian Quinn Talbot was once the World one-armed golf champion.

The Government said in 2006 that it will provide substantial financial support to Bermuda's cricket and football teams. Bermuda's most famous footballers include Clyde Best, Shaun Goater, Reggie Lambe, Sam Nusum and Ralph Bean. In 2006, the Bermuda Hogges were formed as the nation's first professional football team. The team plays in the United Soccer Leagues Second Division.

Sailing, fishing, and equestrian sports are popular with both residents and visitors alike. The Newport–Bermuda Yacht Race is a more than 100-year-old tradition. A sport unique to Bermuda is racing the Bermuda Fitted Dinghy. International One Design racing also started in Bermuda.[9]

At the 2004 Summer Olympics, Bermuda competed in sailing, athletics, swimming, diving, triathlon and equestrian events. In those Olympics, Bermuda's Katura Horton-Perinchief made history by becoming the first black female diver in the Olympic Games. Bermuda has had one Olympic medallist, Clarence Hill,. Hill won a bronze medal in boxing. Bermuda also was in Men's Skeleton at the 2006 Winter Olympics in Turin, Italy. Jillian Teceira was in the Beijing Olympics in 2008. Bermuda also competes in the biennial Island Games. It will host in 2013.

Bermuda is the easternmost point of the so-called "Bermuda Triangle"– a region of sea in which a number of aircraft and ships have allegedly disappeared under mysterious circumstances. Some people think there is a pattern to the disappearances, while other people think it is only coincidence.