Hurricane Fabian was a powerful Cape Verde-type hurricane that hit Bermuda in early September during the 2003 Atlantic hurricane season. Fabian was the sixth named storm, fourth hurricane, and first major hurricane of the season. 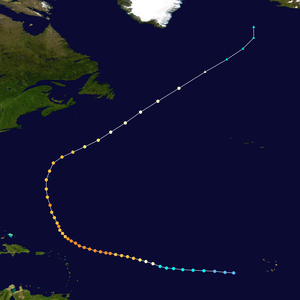 Fabian developed from a tropical wave in the tropical Atlantic Ocean on August 25. It moved west-northwestward under the influence of the subtropical ridge to its north, and steadily strengthened in an area of warm water temperatures and light wind shear. The hurricane attained a peak intensity of 145 mph (230 km/h) on September 1, and it slowly weakened as it turned northward. On September 5, Fabian made a direct hit on the island of Bermuda with wind speeds of over 120 mph (195 km/h). After passing the island, the hurricane turned to the northeast, and became extratropical on September 8.[1]

Fabian was the strongest hurricane to hit Bermuda since Hurricane Arlene in 1963.[2] It was both the most damaging and the first hurricane to cause a death on the island since 1926.[3] The hurricane's powerful winds resulted in moderate damage and destroyed roofs throughout the island. A strong storm surge associated with the hurricane killed four people crossing a causeway on Bermuda, temporarily closing the only link between two islands. The endangered Bermuda Petrel, better known as the Cahow, was threatened by the hurricane, which destroyed ten nests, although volunteer work transported the species to a safer location. Strong swells resulted in damage in northern Puerto Rico and the Dominican Republic, and also caused four people to drown along the United States' Atlantic coast. In all, Fabian caused around $300 million (2003 USD, $357 million in damage and eight deaths.

Because the devastating affects in Bermuda the name Fabian was retired.[4] It was replaced by Fred in 2009.[5]