Tropical Storm Bert was a weak storm that only lasted from June 28 to June 29. Bret hit the eastern coast of Mexico on June 29 before dying inland. Bret was also the second storm of the 2005 Atlantic hurricane season.

Tropical Storm Bert formed close to land over the Bay of Campeche on June 28 before making landfall on Mexico a few hours later on June 29. Bert killed a total of two people. 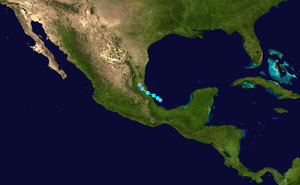 Tropical Depression Two formed from a tropical wave over the Bay of Campeche on June 28, and quickly strengthened and became a tropical storm. Bret then began to move steadily closer to land during the next few hours before making landfall near Tuxpan, Veracruz in eastern Mexico early on June 29 with 40 mph (65 km/h) winds.

Bret quickly weakened as it continued inland, making heavy rain over the eastern coast of Mexico before dissipating over the mountains in central Mexico late on June 29.

Damages in Mexico totaled up to $9 million (2005 USD).[1] Most of the damage came from floods and landslides caused by the heavy rain. Several towns were flooded very badly, including Naranjos and Chinampa (south of Tampico). This was mainly because of the overflowing of the Río Tancochin. A total of about 3,000 homes were damaged.[2]

Two people were reported dead because of Bret. Two people inside a car were killed when the car was swept away by the floodwaters in Naranjos.[3]