Tropical Storm Harvey was a strong tropical storm that moved across the Atlantic Ocean from August 2 to August 8. Harvey was the eighth named storm of the 2005 Atlantic hurricane season. The storm caused no damages.

Harvey formed from a tropical wave to the southwest of Bermuda on August 2 and passed close to Bermuda on August 4, bringing heavy rain to the island. The storm then began to move east and away from Bermuda, which the storm then reached its strongest strength with 65 mph (100 km/h) before becoming an extratropical cyclone on August 8. The system stayed in the northern Atlantic Ocean for a few more days before it died out later. 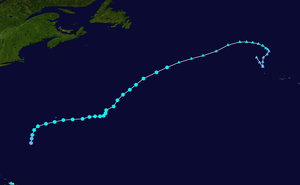 A tropical wave moved west from the African coast on July 22 and went across the Atlantic Ocean without becoming stronger. When the wave came across the Leeward Islands on July 28, the National Hurricane Center began to watch the system closely for any possible strengthening, which did not happen at that time. By August 2, conditions had become more favorable and Tropical Depression Eight formed about 350 miles (595 km) southwest of Bermuda.[1]

The depression strengthened into Tropical Storm Harvey the next day. But a lot of wind shear gave Harvey some subtropical characteristics and also made the official forecasts to underestimate the future strength of the storm.[2]

Harvey passed 45 miles (75 km) south of Bermuda early on August 4, with winds of 60 mph (90 km/h), before removing its subtropical characteristics to become a "fully tropical" storm.[3] As it moved northeast away from the island, the storm strengthened more to its strongest with winds of 65 mph (100 km/h). Without any notice, more wind shear did not cause Harvey to weaken somewhat, although the storm's path did become confusing. Harvey became a strong extratropical storm during the night on August 8. The storm lived for a few more days before dissipating northwest of the Azores on August 14.[1]

As Tropical Storm Harvey came closer to Bermuda, a tropical storm warning was given out late on August 2. Because it was considered possible for the storm to continue gaining strength, a hurricane watch was given out the next day. As the storm began move away from Bermuda on August 4, the hurricane watch and the tropical storm warning were cancelled.[1]

Harvey brought heavy rain to Bermuda, with just over 5 inches (130 mm) reported at Bermuda International Airport. The rain caused some flooding of the roads. Also, there was a report of 45 mph (75 km/h) winds over Bermuda. The storm did not cause any bad damage or kill any people on the island.[1]

When Tropical Storm Harvey formed on August 3, it was the earliest time ever in a season that the eighth tropical storm formed. It beat the previous record held by a storm in. This was the fourth time that the name Harvey had been used to name a tropical cyclone in the Atlantic. It was also the sixth time worldwide. However, because Harvey did not cause any bad damage, the name was not retired by the World Meteorological Organization and will be used again during the 2011 season.