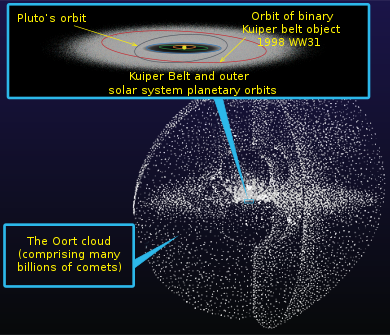 Tyche is the nickname given to a possible gas giant planet in the Solar System's Oort cloud. It is one of several proposed planets beyond Neptune. Tyche was first proposed in 1999 by astronomer John Matese of the University of Louisiana at Lafayette.[1][2]

Matese and Daniel Whitmire say that the points of origin for long-period comets gives a pattern that suggests Tyche's existence. They noted that Tyche, if it exists, should be seen in the archive of data that was collected by NASA's Wide-field Infrared Survey Explorer (WISE) Infrared telescope.[3] However, several astronomers disagree that Tyche exists.[2][4] In 2014 NASA announced that WISE had not found such a planet. [5]

Tyche is in the Nickelodeon TV show The Fairly OddParents. It is also called "Yugopotamia" and is where the character Mark Chang is from.