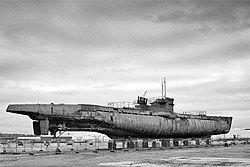 The name is an abbreviation of the German Unterseeboot ("undersea boat").[1] In English, U-boat refers exclusively to the German vessels used during the World Wars. In German, however, the term U-Boot refers to any submarine, including modern and foreign ones.