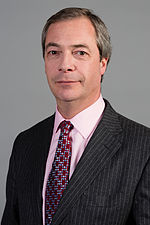 Supporters of UKIP mostly believe in the following things:

In 2008 UKIP banned people who used to be members of the British National Party (BNP) from joining.

UKIP came third in the May 2015 general election, after the Labour Party and the Conservative Party. The party got 12.9% of the vote and gained one seat.

In the 2017 general election, UKIP's share of the vote went down to 1.8 and they didn't win any seats. The next day UKIP's leader Paul Nuttall resigned.

There are currently over 20,000 people who are members of the UKIP.

In February 2018 Gerard Batten become leader of the party firstly on an interim basis before winning the UKIP leadership election in April 2018 unopposed.[16]

Accusations of embracing the far-right

Since the election of Batten as leader of the party there have been accusations that UKIP is embracing the far-right. Those saying the party was moving to the right began early in Battern's leadership when he began to focus the party around rejecting Islamic ideology and when a quote arose of Battern calling Islam a "death cult".[18] In September 2018 Battern was also criticised for attending an anti-Muslim rally in Sunderland.[19] These accusations grew much stronger after the far-right activist Tommy Robinson was appointed an advisor to Battern in November 2018.[20] This led to many of UKIP's MEPs and former party leaders Nigel Farage and Paul Nuttall to leave the party, as well as the party's leader in Scotland.[21][22][23][24]