In this Japanese name, the family name is Uesugi. 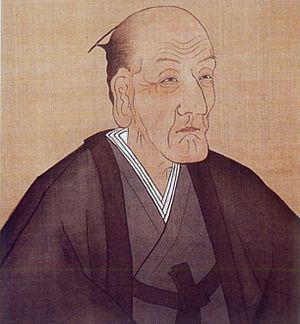 Uesugi Harunori (上杉 治憲?, 1751–1822) was a Japanese daimyo. He was the 9th leader of the Yonezawa domain. This domain the area that today is the Yonezawa and Okitama region. Uesugi was born in Edo. He was the second son of a daimyo of the Akizuki clan. His father controlled part of Hyuga province. His mother was a granddaughter of the fourth head of Yonezawa. As a child, he was called "Matsusaburō" (松三郎) and "Naomatsu" (直松). He was adopted by the daimyo of Yonezawa, Uesugi Shigesada. In 1767 he replaced Shigesada as diamyo. After retirement, he began to use the gō, or pen name, Yozan (鷹山).

Today, Uesugi is best remembered for his financial changes in his domain. He is often used as an example of a good governor of a domain. Yonezawa had been in debt for about a hundred years when Uesugi took over. Shigesada had thought about returning the domain to the shogunate because of the debt. His his father-in-law, the daimyo of Owari province, told him he should resign as daimyo instead of this. This is how Uesugi came to be daimyo of Yonezawa. He created strict disciplinary measures. Several of his karō (advisers) did not think his plans were good. He had these people killed. Because of many of the changes he caused, Yonezawa became prosperous. It also did not suffer much from the famine in Japan in the Tenmei era (1781-9). In 1830, less than a decade after Harunori's death, the shogunate said that Yonezawa was a paragon of a well-governed domain.

Uesugi's beliefs about governance and how a feudal lord show act were written in a letter to his son Haruhiro: