Enigma machine out of its wooden box 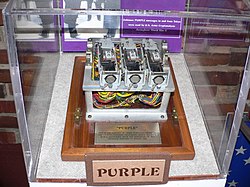 Ultra was the name given by British military intelligence for the attack on German military codes in World War II. It included the Enigma machine and, later, the Japanese Purple machine.

The work on Enigma started before the war, when Polish cryptographers smuggled out an Enigma machine to England. The codename 'Ultra', however, was only given to the work in 1941.

Work on understanding the Enigma, and on breaking German military signals, was of vital importance in the Battle of the Atlantic, the greatest threat to Britain during the war.[1] The key event occurred in 1941, when not just a machine, but also a codebook, was got from a German submarine.[2]

Wartime signals intelligence (SIGINT) were got as follows. First of all, encrypted German radio messages in Morse code were recorded in Britain. Their place of origin was got by recording the messages at two different receiving places. The attack on the codes was done at the Government Code and Cypher School (GC&CS) at Bletchley Park.[3][4][5]

Ultra became the standard term among the western Allies for all such intelligence. The name arose because the intelligence got was thought more important than the highest British security classification (Most Secret).