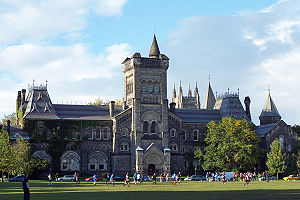 University College is one of the colleges in the University of Toronto.

The University of Toronto is a university in Toronto, Ontario, Canada. It was created by the King of the United Kingdom in 1827,[1] many years before Canada became a country. The university is made up of 12 different colleges where students live and study. These colleges all have their own buildings, dining halls and libraries. Some colleges relate to Christian churches, but other colleges are not religious. The university also has hospitals and many places for research.

In teaching, the University of Toronto is known for its ideas about literature and communication. It is also the place where insulin and stem cells were first found. Its people built the first electron microscope, found the first black hole, and began a touchscreen technology called multi-touch. It is the university that has the most money and research work in Canada. The university's sports teams are called the Varsity Blues, and they have very long histories in American football and ice hockey. The University of Toronto has been ranked as one of the top universities in the world.