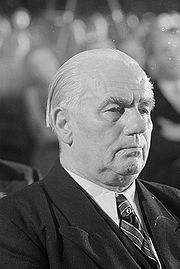 Friedrich Wilhelm Reinhold Pieck (born 3 January 1876 in Guben; today Gubin, Poland; died 7 September 1960 in Berlin) was a German politician, a Social Democrat and a late communist. He was joint founder of the SED and from 1949 to his death in 1960 the first and only president of the GDR.