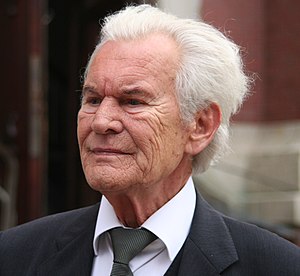 Wilhelm Wieben (2 June 1935 – 13 June 2019) was a German journalist, actor and author. He is known for presenting Tagesschau between 1973 and 1998, the most watched daily television news program in Germany. He also worked as a journalist for Radio Bremen. He also wrote books in Low German. Wieben appeared in the Falco song "Jeanny" reading a news broadcast.