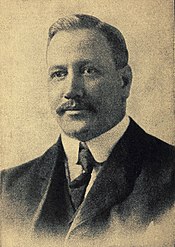 William George Morgan (23 January 1870 – 27 December 1942) was an American educator and businessman. He was the inventor of volleyball, originally called "Mintonette". He was born in Lockport, New York.[1]

He met James Naismith, inventor of basketball, while Morgan was studying at Springfield College, Massachusetts in 1892. Like Naismith, Morgan went for a career in Physical Education at the YMCA. He was inspired by Naismith and basketball, in 1895, in Holyoke, Massachusetts, Morgan invented "Mintonette" a less harder team sport than basketball which was more suitable for older members of the YMCA but one that still needed athletic skill.[2]