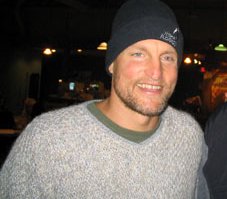 He made his movie debut in the 1986 movie Wildcats.

Harrelson's father was Charles Voyde Harrelson. He was a contract killer. He was arrested for the killing of Federal Judge John H. Wood, Jr. by rifle fire in 1979 in San Antonio.[2]

He would like the legalization of marijuana and hemp. He is also an environmental activist. Harrelson is a supporter of the 9/11 truth movement. He has supported reopening an investigation into the September 11 terrorist attacks.[7]

In 1985, Harrelson married Nancy Simon, daughter of playwright Neil Simon, in Tijuana. The two meant to divorce the following day, but the storefront marriage/divorce parlor was closed when they had returned to it. The two remained married for ten months.[8]

Harrelson was arrested in Columbus, Ohio in 1982 for disorderly conduct. He was found dancing in the middle of the street.[9] He was also charged with resisting arrest after he ran from the police and assault after he hit one of the officers.[9] Harrelson avoided jail time by paying a $390 fine.[10]

On June 1, 1996, Harrelson was arrested in Lee County, Kentucky. He symbolically planted four hemp seeds. This was to challenge the state law which did not distinguish between industrial hemp and marijuana. Harrelson was acquitted of these charges in 2000.[11]

In 2002, Harrelson was arrested in London after an incident in a taxi that ended in a police chase. Harrelson was taken to a London police station and later released on bail.[12] The case was later dismissed after Harrelson paid the taxi driver involved in the incident £550 ($844).[13]

In 2008, TMZ photographer Josh Levine filed a lawsuit against Harrelson. It was for an alleged attack outside a Hollywood nightclub in 2006. A video of the incident appeared to show Harrelson grabbing a camera and clashing with the photographer. Los Angeles prosecutors would not press charges against the actor. Levine filed a lawsuit asking for $2.5 million in damages.[14] The case was dismissed in April 2010.[15]

He has won multiple awards including: