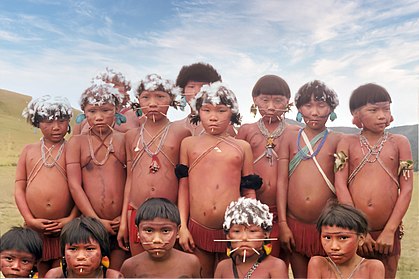 The Yanomami (also spelled Yąnomamö or Yanomama) is a local tribe living in southern Venezuela (Amazonas department) and northern Brazil (Amazonas state and Roraima). There are approximately 35,000 Yanomami people who live in some 200–250 villages. They live in shabonos, which are villages made with wood, straw and palm leaves. They are also called Yanomamo and Yanam. The word "Yanomami" means "human being".

The Yanomami tribe have lived in the rain forests of South America for centuries. They live in small groups, and shelter in grass huts. Each of the sections has its own language. The Yanomami tribe is also known as the Yanomamo. There is an average of 20,000 Yanomami. About 12,000 of them are Yanomamo. They eat plantains which is the most important food. The Yanomami love to hunt. Most of the child raising is done by the females of the family. Yanomami tribe villages sometimes have different languages so people from one may not understand the others. Rituals are a very important part of being a Yanomami. There are about 200-250 Yanomami villages in the area between the tropic of cancer to Capricorn.