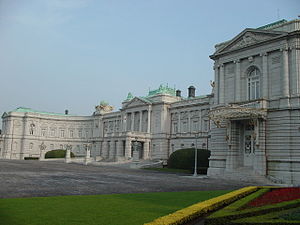 The 12th G7 Summit was a meeting in 1986 for the leaders of Canada, the European Commission, France, Germany, Italy, Japan, the United Kingdom and the United States.

The international group of leaders were together in Japan from May 4-6, 1986.[1] The meetings were held at the State Guesthouse (Akasaka Palace) in Tokyo.[2]

The Tokyo summit of the Group of Seven (G7) was the 12th meeting in a series which began in 1976.

The G8 and the summit are part of a consultation process. The G8 is not an international organization.[4] It is an informal group.[5]

The participants were the "core members" of the group:[6]

The G7 leaders agreed to work together to improve policy coordination. There was a decision to establish a meeting of finance ministers.[7]