KidzSearch Safe Wikipedia for Kids.
Jump to: navigation, search
This article is about the written symbol. For other uses, see Accent (disambiguation).

The acute accent ( ´ ) is a mark in many written languages. It is usually added above a vowel to show how to say it. Acute accents are sometimes added to consonants too. Sometimes, the acute accent changes the sound of the whole word by giving it stress in a sentence. This accent is part of many modern languages that use Latin, Cyrillic, and Greek alphabets. The acute accent is one of many similar marks called diacritics.

The acute accent was first used in Ancient Greece. It told the speaker when to say a syllable with a high pitch. Another early accent mark was the apex. In Latin the apex marked long vowels.[1]

The acute accent is mainly used to tell readers about the sound of vowels in words. Sometimes it is very important to the meaning because it shows the difference between two similar words. For example, resume may mean to start again, but résumé is a summary of someone's work and school experience. Some languages use the accent to show the same changes in sounds, but others use it differently. The acute accent may show: 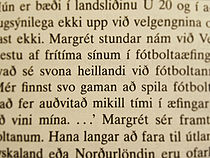 Example of acute accents in Icelandic

French words in other languages

Many languages have borrowed words from French. Many Norwegian words which came from French keep an acute accent. Some examples are: allé, kafé, idé, komité. Swedish examples include café and resumé (noun). Examples in English include: attaché, canapé, cliché, communiqué, café, décor, fiancé, passé, toupée and touché. However, sometimes writers forget or choose not to use the accent mark.

Writing other languages in English

Some languages such as Arabic, Persian, or Japanese do not use alphabets. Some writers use the acute accent to tell how the words should sound when words from these languages are written in English. This is more common in older books and less common today.

The ISO-8859-1 and Windows-1252 character encodings included á, é, í, ó, ú, ý. They also had how letters and accents looked when they were written as capital letters. Unicode has many more letters with the acute accent.

On Wikipedia, users make these symbols by clicking on a link in a box. Some other websites work the same way.