A statue of Alan Turing 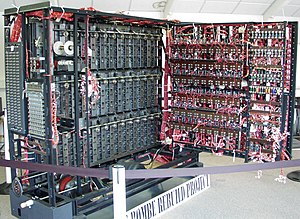 A rebuild of a machine made by Alan Turing

Turing was one of the people who worked on the first computers. He was the first person to think of using a computer to do things that were too hard for a person to do. He created the Turing machine in 1936. The machine was imaginary, but it included the idea of a computer program.

Turing was interested in artificial intelligence. He proposed the Turing test, to say when a machine could be called "intelligent". A computer could be said to "think" if a human talking with it could not tell it was a machine.[2]

During World War II, Turing worked to break German ciphers (secret messages). Using cryptanalysis he helped to break the codes of the Enigma machine. After that, he solved other German codes.

From 1945 to 1947, Turing worked on the design of the ACE (Automatic Computing Engine) at the National Physical Laboratory. He presented a paper on 19 February 1946. That paper was "the first detailed design of a stored-program computer".[3] Although it was possible to build ACE, there were delays in starting the project. In late 1947 he returned to Cambridge for a sabbatical year. While he was at Cambridge, the Pilot ACE was built without him. It ran its first program on 10 May 1950.

In 1954, after suffering for two years, Turing died from cyanide poisoning. The cyanide came from either an apple which was poisoned with cyanide, or from water that had cyanide in it. The reason for the confusion is that the police never tested the apple for cyanide.[4]