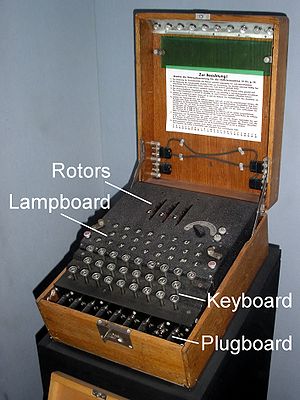 Three rotors of an enigma machine

The Enigma machine was created for Germany by Arthur Scherbius in World War I. It is a cypher machine: a way of changing the letters of a message so that it appears to be scrambled letters (or, random letters).

Each time a letter is typed, it appears as another letter in the alphabet. The choices are not random. They are decided by a series of rotors which are set each day to a different starting set-up. Every press of a key turns the rotors to a new position.

On 25 July 1939, in Warsaw, the Poles showed French and British intelligence agents their cryptanalysis of the Enigma, and promised each delegation a Polish-built Enigma. The demonstration was a vital start for the later British work at Bletchley Park.

"Hut 6 Ultra would never have got off the ground if we had not learned from the Poles, in the nick of time, the details both of the German military version of the commercial Enigma machine, and of the operating procedures that were in use". Gordon Welchman, The Hut Six Story, 1982, p. 289.

During the invasion of Poland (1939) the Polish codebreakers were sent to France for safety. Later, they fled to Britain. Making technical improvements, British codebreakers solved a vast number of messages from Enigma, and gave the plaintext to military staff. The information got from this, called "Ultra" by the British, was a great help to the Allied war effort. Ultra also included decrypts of other German, Italian and Japanese cyphers and codes, including the cypher of the German High Command.

Mistakes by German operators helped the cryptanalysis of Luftwaffe Enigmas, and the British capture of key tables and a machine from a German submarine helped in cracking Navy ones.[1][2]

On 15th July 2011, Queen Elizabeth II visited Bletchley Park, where the machine is kept in the Museum, to pay tribute to those who worked there, since they cut short the war by breaking the cyphers of Nazi Germany.[3]