Albert Charles Paul Marie Roussel (5 April 1869 - 23 August 1937) was a French composer. Roussel spent seven years as a midshipman. He only turned to music as an adult. But he then became one of the most important composers of the years between the two world wars. His earlier music came from the impressionism of Debussy and Ravel. He turned more towards neoclassicism with his later music. 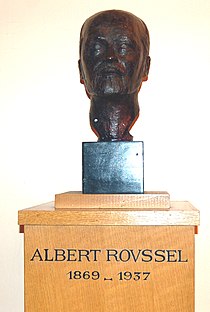 Albert Roussel was born in Tourcoing (Nord department of France). HIs earliest interest was not music. It was mathematics. He spent some time in the French Navy. In 1889 and 1890 he served on the crew of the frigate Iphigénie. These travels were significant to his later career as a composer. This is because many of his musical works would reflect his interest in far-off and interesting places.

After Roussel left the Navy in 1894, he began to study music with Eugène Gigout. He continued his studies until 1908 at the Schola Cantorum (one of his teachers there was Vincent d'Indy). While he studied, he would also teach at the Schola. His fellow students were Erik Satie and the young Edgard Varèse.

During World War I, he served as an ambulance driver on the Western Front. After the war, he bought a summer house in Normandy. This is where he gave most of his time to composing music.

Roussel was a classicist. Some of his first works are very much like impressionism. But he soon found a style fit just for him. This style had a strong rhythmic sound.

The Schola Cantorum left a mark on Roussel's mature writing. Compared with the style of other French composers like Gabriel Fauré or Claude Debussy, Roussel's orchestration is rather powerful and heavy.

Roussel also liked jazz. He wrote a piano-vocal composition called Jazz dans la nuit. This has a lot in common with other jazz-influenced works such as the "Blues" second movement of Maurice Ravel's Violin Sonata.

Roussel's most important pieces include his ballets. They are Le festin de l'araignée, Bacchus et Ariane, and Aeneas. Among his other works are four symphonies (the Third is the most often played), a piano concerto, a concertino for cello and orchestra, a psalm setting for chorus and orchestra, music for the theater, solo piano music, and songs. He died in the town of Royan in western France in 1937. That is the same year that his countrymen Ravel, Charles-Marie Widor, and Gabriel Pierné died.

Arturo Toscanini included the suite from the ballet Le festin de l'araignée in one of his concerts with the NBC Symphony Orchestra. Georges Prêtre recorded this same music with the Orchestre National de France for EMI in 1984.