The skeletal mount of AMNH 5753, posed as scavenging an Apatosaurus.

Allosaurus was a large theropod dinosaur from the Jurassic period, a predatory carnivore.

Allosaurus averaged 8.5 metres (28 ft) in length, though some remains suggest it could reach over 12 meters (39 ft). Its three-fingered forelimbs were smaller than its large hind legs, and the body was balanced by a long, heavy tail.[1] It weighed 2/3 tons.

It is the most common large predator found in the Morrison Formation of North America. This formation was laid down 155 to 145 million years ago, in the Jurassic.

Allosaurus was at the top of the food chain. It probably preyed on large herbivorous dinosaurs and perhaps even other predators (e.g. Ceratosaurus). Potential prey included ornithopods, stegosaurs, and sauropods.

Some paleontologists think Allosaurus had cooperative behavior, and hunted in packs. Others believe they may have been aggressive toward each other.

Groups have been found together in the fossil record. This might be evidence of pack behavior, or just the result of lone individuals feeding on the same carcass. 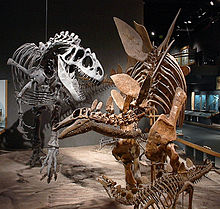 Allosaurus and Stegosaurus skeletons, Denver Museum of Nature and Science

Allosaurus was probably not a predator of fully grown sauropods, unless it hunted in packs. It had a modestly sized skull and relatively small teeth, and was greatly outweighed by adult sauropods. Another possibility is that it preferred to hunt juveniles instead of fully grown adults.

Researchers have made other suggestions. Robert T. Bakker compared the short teeth to serrations on a saw. This saw-like cutting edge runs the length of the upper jaw, and could have been driven into prey. This type of jaw would permit slashing attacks against much larger prey, with the goal of weakening the victim.[5]

Another study showed the skull was very strong but had a relatively small bite force. The authors suggested that Allosaurus used its skull like a hatchet against prey, attacking open-mouthed, slashing flesh with its teeth, and tearing it away without splintering bones.

They suggested that different strategies could be used against different prey. The skull was light enough to allow attacks on smaller and more agile ornithopods, but strong enough for high-impact ambush attacks against larger prey like stegosaurs and sauropods.[6]

Their ideas were challenged by other researchers, who found no modern examples of a hatchet attack. They thought it more likely that the skull was strong to absorb stresses from struggling prey.[7]

The original authors noted that Allosaurus itself has no modern equivalent, so the absence of a modern 'hatchet attacker' was not significant. They thought the tooth row was well-suited to such an attack, and that articulations (joints) in the skull helped to lessen stress.[8]

Another possibility for handling large prey is that theropods like Allosaurus were 'flesh grazers' which could take bites of flesh out of living sauropods, sufficient to sustain the predator so it did not need to kill the prey outright. This strategy might have allowed the prey to recover and be fed upon again later.[2] 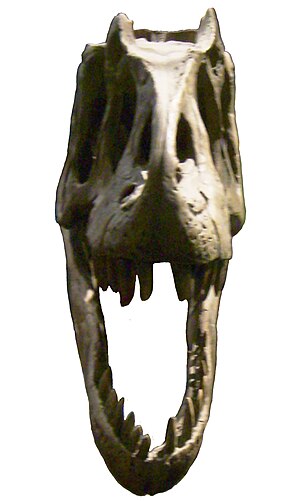 Another idea is that ornithopods, the most common available prey, could be subdued by Allosaurus grasping the prey with their forelimbs, and then making bites on the throat to crush the trachea.[9] The forelimbs were strong and capable of restraining prey,[10] and the articulation of the claws suggests that they could have been used to hook things.[11]

The shape of the Allosaurus skull limited binocular vision to 20° of width, slightly less than that of modern crocodilians. As with crocodiles, this may have been enough to judge prey distance and time attacks.[12] The similar width of their field of view suggests that allosaurs, like modern crocodiles, were ambush hunters.[13]

The fossil site known as the Cleveland-Lloyd Dinosaur Quarry in Emery County, Utah was known in 1927, but major operations did not begin there until 1960.[15] An effort from nearly 40 institutions got thousands of bones between 1960 and 1965.[1] The quarry is notable for the many Allosaurus remains, the condition of the specimens, and our ignorance of its ancient origin. It is estimated that the remains of at least 46 A. fragilis have been found there, out of at least 73 dinosaurs. The fossils found there are disarticulated (separate) and well-mixed.

Suggestions as to how it arose include animals getting stuck in a bog, to becoming trapped in deep mud, to falling victim to drought-induced mortality around a waterhole, to getting trapped in a spring-fed pond or seep.[16] Regardless of the cause, the great quantity of well-preserved Allosaurus remains means the animal is one of the best-known theropods. Individuals of almost all ages and sizes are found, from less than 1 meter (3.3 ft)[17] to 12 meters (39 ft) long.

There are five recognised species of Allosaurus: 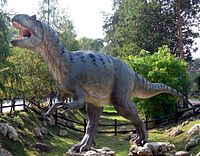 Allosaurus, like Tyrannosaurus, has come to represent the quintessential large, carnivorous dinosaur in popular culture.

It is a common dinosaur in museums. A number of museums cooperated in excavations at the Cleveland Lloyd Dinosaur Quarry. By 1976, museums in eight countries on three continents had Cleveland-Lloyd allosaur material or casts.[1] Allosaurus is the official 'state fossil' of Utah.[18]

Allosaurus is top predator in both Arthur Conan Doyle's 1912 novel, The Lost World, and its 1925 film adaptation, the first full-length motion picture to feature dinosaurs.[19]

Allosaurus was used as the starring dinosaur of the 1956 film The Beast of Hollow Mountain,[20] and the 1969 film The Valley of Gwangi. Gwangi is billed as an Allosaurus, though Ray Harryhausen based his model for the creature on Charles R. Knight's depiction of a Tyrannosaurus.[21] Allosaurus appeared in the second episode of the 1999 BBC television series Walking with Dinosaurs and the follow-up special The Ballad of Big Al, which speculated on the life of the 'Big Al' specimen, as revealed by the numerous injuries and pathologies in its skeleton.[22]