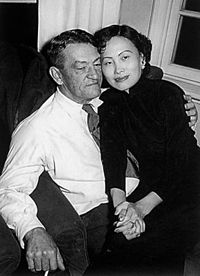 Chennault with her husband, Claire, 1950

In January 1981, Chennault visited Beijing to meet the Chinese leader Deng Xiaoping, as a private citizen, but in fact as an unofficial diplomat representing the incoming Republican president Ronald Reagan, who was due to be sworn in as president on 20 January 1981.[1]