Democritus was a Greek philosopher, 460 BC 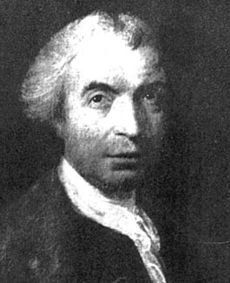 Roger Joseph Boscovich. A Croatian Jesuit who provided a prototype of the atomic theory 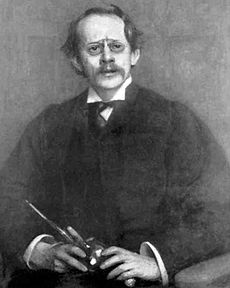 Sir Joseph John Thomson (1856–1940), English physicist, discovered the electron and its negative charge. He got the Nobel Prize in Physics

In chemistry and physics, the atomic theory explains how our understanding of the atom has changed over time. Atoms were once thought to be the smallest pieces of matter. However, it is now known that atoms are made up of protons, neutrons, and electrons. These subatomic particles are made up of quarks. The first idea of the atom came from the Greek philosopher Democritus. A lot of the ideas in the modern theory came from John Dalton, a British chemist and physicist.

The theory applies to solids, liquids and gases, but it does not apply in way analogous to plasmas or neutron stars.

Some other philosophers agreed, and others disagreed. They had no way to experiment to show whether his theory was true or not.

In 1758, Roger Joseph Boscovich described a precursor of the atomic theory.[1]

Dalton defined the atom as the basic unit of an element that can take part in a chemical combination.

Schematic representation of the Thomson model.

In 1850, Sir William Crookes constructed a 'discharge tube', that is a glass tube with the air removed and metallic electrodes at its ends, connected to a high voltage source. When creating a vacuum in the tube, a light discharge can be seen that goes from the cathode (negatively-charged electrode) to the anode (positively-charged electrode). Crookes named the emission 'cathode rays'.

According to the assumptions established about the atoms neutral charge, Thomson proposed the first atomic model, that was described as a positively-charged sphere in which the electrons were inlaid (with negative charges). It is known as the plum pudding model.

In the same time, experiments by Eugene Goldstein in 1886 with cathode discharge tubes allowed him to establish that the positive charges had a mass of 1.6726 * 10−27 kg and an electrical charge of +1,6 * 10 −19 C. Lord Ernest Rutherford later named these positively charged particles protons

In 1910, the New Zealand physicist Ernest Rutherford put forward the idea that the positive charges of the atom were found mostly in its center, in the nucleus, and the electrons (e-) around it.

Rutherford showed this when he used an alpha radiation source (from helium) to hit the very thin gold sheets, surrounded by a Zinc sulphide lampshade that produced visible light when hit by alpha emissions. This experiment was called the Geiger–Marsden experiment or the Gold Foil Experiment

By this stage the main elements of the atom were clear, plus the discovery that atoms of an element may occur in isotopes. Isotopes vary in the number of neutrons present in the nucleus. Although this model was well understood, modern physics has developed further, and present-day ideas cannot be made easy to understand. Some idea of present-day atomic physics can be found in the links in the table below.