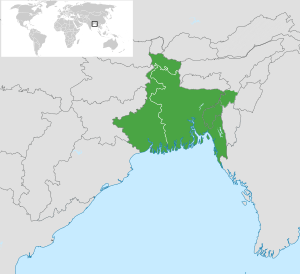 The ethno-linguistic region of Bengal.

Bengali nationalism is the political expression of ethno-national consciousness of the Bengali people. These people live in the region of Bengal.[1][2] The region's territory is divided between Bangladesh and the Indian state of West Bengal.

The Bengali Language Movement and its fallout had created a lot of cultural and political hostility between the two parts of a united Pakistan. Despite making up a majority of the Pakistani population, Bengalis were only a small part of Pakistan's military, police and civil services. Ethnic and socio-economic discrimination against Bengali people in East Pakistan made them angry. Because West Pakistanis were influenced by Perso-Arabic culture, they saw Bengali culture as too closely associated with Hindu culture. One of the first groups demanding the independence of East Pakistan was the Swadhin Bangal Biplobi Parishad (Free Bengal Revolutionary Council).

The restoration of a sovereign and independent state of West Bengal as existed for several centuries prior to the advent of the British Raj. The holding of a plebiscite in the western part of Bengal to determine whether the nationalists Bengali people wish to remain within the Indian Union under a distant and non caring nation or not. The Bengalis were not asked whether they wished to join the Dominion of India in 1947; it is hence imperative that this long overdue plebiscite be conducted now. The setting up a Bengali Parliament and the holding of elections in the Bengal region of East India to determine the leaders of an independence West Bengal state, the cessation of the incredible looting and pillaging of both territories or Greater Bangladesh by the corrupt and criminal mind of New Delhi government. This can only be achieved by means of the establishment of a free state government based in Kolkata in control of its own finacial resources.