Besançon is a city in France. It was the capital of the former Free County (Franche-Comté) region. It is the prefecture of the Doubs department. Its population is around 117,600 (2008).

Besançon is an old city. It is discovered in 58 BC and Julius Caesar writes about it in his book Commentarii de Bello Gallico where it is called Vesontio. The etymology (origin of the word) is not certain. It could have a Celtic origin. The Celtic word wes means mountain. In the 4th century, the letter B became V. The city name changed to Besontio or Bisontion. It became Besançon in 1243. In 1871 the city is going through a revolutionary period, known as Besançon Commune.

The city has a Renaissance citadel. It was later used by the Nazis during World War II. 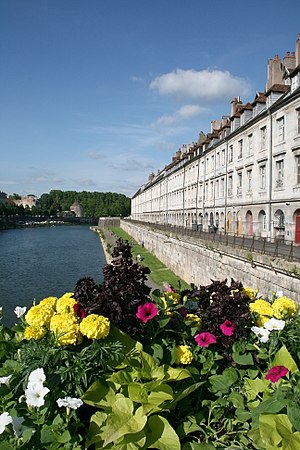 The Doubs (river), the Tour de la Pelote and the Quai Vauban. 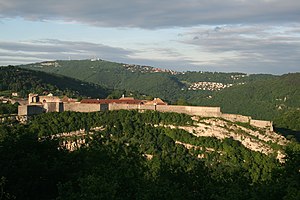 The citadelle in Besançon

Besançon is twinned with: