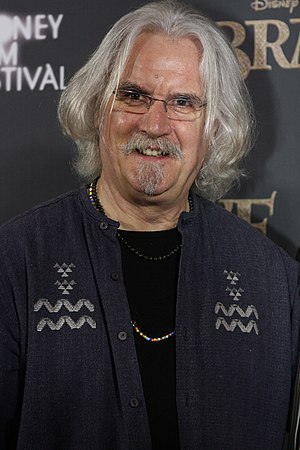 Sir William "Billy" Connolly CBE (born 24 November 1942) is a Scottish comedian, actor, voice artist and musician from Glasgow. Sometimes, he is known as The Big Yin (The Big One in Scottish).[1]

Connolly was born at home in Anderston, Glasgow. He grew up in a tenement in the same inner-city area. Connolly has five children. He is married to Pamela Stephenson, the mother of his three youngest children.[2]

In 2013, he was diagnosed with Parkinson's disease and had surgery for prostate cancer.[3] In January 2019, Connolly said he was "nearing the end of his life" as his Parkinson's advanced.[4]

Connolly has been repeatedly voted Britain's best comedian by television viewers. He is also a folk musician and television presenter.

Connolly was nominated for a BAFTA award for his role in the movie Mrs. Brown. He was given a CBE in 2003.[5]