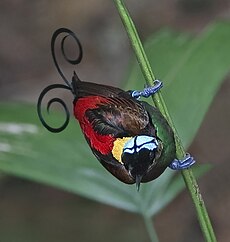 The birds of paradise are songbirds of the family Paradisaeidae. They live in eastern Indonesia, Maluku, Papua New Guinea, Torres Strait Islands, and eastern Australia. Best known are the members of the genus Paradisaea, including the type species, the greater bird-of-paradise, Paradisaea apoda.

They live in tropical forests like rainforests, swamps and moss forest. They build their nests from soft materials, such as leaves, ferns, and vine monsters, typically placed in a tree fork.[1]

These birds are best known for the remarkable plumage and behaviour of the males. They are an extreme example of how sexual selection works.[2]

Females choose males who they instinctively see are fine specimens of their species. The colours of the plumage, the construction of the nest, the song and the mating dance all play a part. In some species the pairing is monogamous, and in others the males are polygamous. If they are monogamous, the males look much like the females. If they are polygamous, the males are very much flashier than the females. In both cases, it is the female who makes the choice of partner.

Birds of paradise have bodies which look rather like a crow. They have stout or long bills and strong feet, About two-thirds of the species are strongly sexually dimorphic.

In most species, the diet is mostly fruit, but riflebirds and sicklebills also prefer insects and other arthropods.[1]