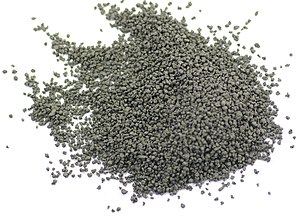 Gunpowder (or gun powder) is a mix of chemical substances (charcoal, sulfur and saltpeter). It burns very rapidly, and creates gases. Those gases use up more space than the gunpowder they come from, so they push outward. If the gunpowder is in a small space, the gasses will push on the walls of the space, building up pressure. A bullet is pushed on in this way inside of a gun, causing it to fly out at high speeds. The pressure is not high enough, though, to destroy the gun barrel (the long metallic tube). Gun powder is packed into metal cylinders behind the bullet, called the cartridge. The cartridge is detonated when it gets hit very hard by a pin, or "hammer".

Gunpowder was probably invented by the Chinese, the first references of black powder, which is a form of gun powder date to the 13th century, when Roger Bacon described the formula of black powder.