A blast injury is a wound caused by direct or indirect exposure to an explosive blast. Physical blast injuries are divided into four categories, with a fifth for secondary illnesses caused by the blast, and a sixth category for the effects of associated post-blast psychological trauma such as post traumatic stress disorder (PTSD).[1] 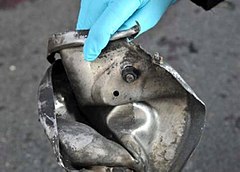 Explosive fragment
Fragment of pressure cooker used to make an Improvised Explosive Device (IED) detonated at the 2013 Boston Marathon. Gunpowder - a low order explosive - was used in the IED. Fragments such as this cause secondary blast injuries. 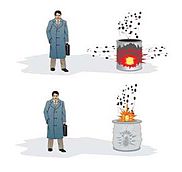 Blast environment
Redirection of blast force of a terrorist bomb placed in public area trashcan designed to reduce risk potential. The environment in which an explosion occurs is one of the factors in determining blast injuries.

An explosion results from the rapid release of energy. Explosions fall into four general categories:

Types of blast injuries
A person may suffer multiple injuries and from more than one category of blast injury. They may have ruptured ear drums, wounds from penetrating fragments (shrapnel), fractured legs or traumatic amputation, as well as burns of varying degrees and inhalation injuries. Injuries from more than one category are common and are referred to as combined injuries.[3] 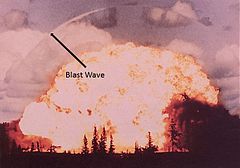 Blast wave
In this image a blast wave from a conventional explosion is clearly visible.

Blast wave spreading out
An HE explosion creates gas which spreads outward from the point of detonation. 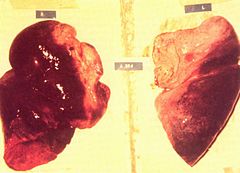 Blast injuries are divided into four classes of physical trauma primary, secondary, tertiary, and quaternary. A fifth category, the quinary injuries, are those caused by toxic substances associated with the blast.

Primary injuries are caused by the explosion's shock waves. Air and fluid-filled internal organs are most commonly affected, but the blast wave may also cause external injuries such as traumatic amputation.

The stuctures of the internal ears are most often affected by the blast wave, with perforated ear drums the most common injury. The most common fatal injury in victims who survive the initial blast is blast lung. Blast lung can result in pulmonary contusions, bleeding and fluid build-up in the lungs with damage to airways and blood vessels.

Most casualties in an explosion are caused by secondary blast injuries. These injuries may be caused by fragments of the explosive device and other objects within the blast zone being propelled by the force of the explosion. These objects may strike any part of the body resulting in penetrating trauma. The severity of the penetrating trauma depends to a degree on the size of the object, the depth of penetration, and the part of the body hit.

Secondary blast injuries are common in deliberate explosions such as those caused by terrorist bombs. The bombs are often designed with objects such as nails, or ball bearings packed in and around the explosive device to act as shrapnel.

These injuries may also occur in accidental explosions - such as may occur in an industrial accident - when objects in the environment affected by the blast, such as shattered glass take the role of shrapnel.

Displacement of air by the explosion creates a blast wind that can throw victims against solid objects. Injuries resulting from this type of traumatic impact are referred to as tertiary blast injuries. Tertiary injuries may present as some combination of blunt and penetrating trauma, including bone fractures and coup contre-coup injuries.

Young children, because they weigh less than adults, are at particular risk of tertiary injury.

Quaternary injuries, include flash burns, crush injuries from falling debris and inhalation injuries, which may make existing respiratory conditions such as asthma and COPD worse.

This category of blast injury has been added fairly recently to classify injuries , which often results in a hyperinflammatory state[6] may due to exposure to the environmental contaminants associated with the various types of explosive blasts including, bacteria, chemicals and radiation (dirty bombs) as well as adverse tissue reaction to fuel and metals in the blast.

The psychological trauma which may occur in explosive blast survivors includes post traumatic stress disorder (PTSD). A concussion sustained in a blast may also be a risk factor for developing PTSD independent of a person's psychological reaction to the witnessed event. Psychological trauma may also occur in the complete absence of physical injuries.

Neurotrauma can occur due to the mechanisms of one or more blast injury categories. Bleeding from injured organs such as lungs or bowel causes a lack of oxygen in all vital organs, including the brain. Damage of the lungs reduces the surface for oxygen uptake from the air, reducing the amount of the oxygen delivered to the brain. Tissue destruction initiates the synthesis and release of hormones or mediators into the blood which, when delivered to the brain, change its function. Irritation of the nerve endings in injured peripheral tissue and/or organs also significantly contributes to blast-induced neurotrauma.

Individuals exposed to blasts frequently have loss of memory for events before and after explosion, confusion, headache, impaired sense of reality, and reduced decision-making ability. Patients with brain injuries acquired in explosions often develop sudden, unexpected brain swelling and cerebral vasospasm despite continuous monitoring. However, the first symptoms of blast-induced neurotrauma (BINT) may occur months or even years after the initial event, and are therefore categorized as secondary brain injuries.[7] The broad variety of symptoms includes weight loss, hormone imbalance, chronic fatigue, headache, and problems in memory, speech and balance. These changes are often debilitating, interfering with daily activities. Because BINT in blast victims is underestimated, valuable time is often lost for preventive therapy and/or timely rehabilitation.[7]