A Molotov cocktail thrown against police, at a demonstration in Rostock. People were demonstrating against the G8 summit in Heiligendamm.

A Molotov cocktail is the term for a simple incendiary weapon. It is also known as a petrol bomb, fire bomb, or benzine torch. They are relatively easy to make, and may be used by irregular paramilitary forces and rioters. These bombs are also used to commit arson (set fire to buildings).

They were used for the first time in the Spanish Civil War between July 1936 and April 1939,[1] before they became known as "Molotov cocktails". 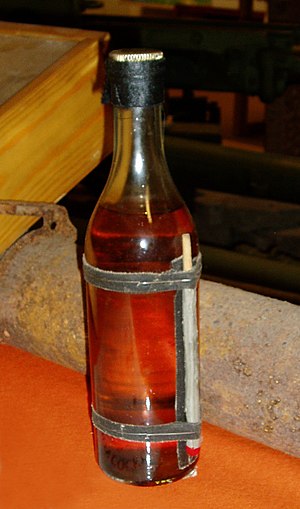 The original design of Molotov cocktail as it was used during the Winter War of 1939–1940. The bottle has storm matches instead of a rag for a fuse.

A Molotov cocktail consists of a glass bottle partly filled with a flammable liquid. The liquid will typically be gasoline, alcohol, methanol or ethanol. The mouth of the bottle is closed with a cork or other type of tight sealing made of rubber, glass, or plastic, and a cloth rag is fixed securely around the mouth. The weapon is used by first soaking the rag in a flammable liquid immediately before using it, lighting the rag, and throwing the bottle at the target. The bottle breaks when it lands, spilling the flammable liquid over the target, which is then ignited by the burning rag.

Many substances may be added to the basic Molotov cocktail to enhance its use as a weapon. These include:

Molotov cocktails are similar to napalm bombs in principle. Napalm was originally made by combining flammable naphthalene and petrol with a thickening agent palmitic acid. The latter two are the main ingredients of Molotov cocktails. When gasoline is used as the main ingredient, motor oil is commonly added to help the gasoline cling to the target.

The name "Molotov cocktail" is derived from Vyacheslav Mikhailovich Molotov, a Soviet politician. He was the People's Commissar for Foreign Affairs, or the Foreign Minister, of the Soviet Union.

During the early part of World War II, when Finland refused to surrender some land to the Soviet Union, the Soviets invaded. The poorly equipped and heavily-outnumbered Finnish Army faced Red Army tanks in what came to be known as the Winter War. The army borrowed an improvised incendiary device from the 1936–39 Spanish Civil War. In that conflict, the Spanish Nationalists under the orders of General Francisco Franco had used the weapon against Soviet T-26 tanks. Those tanks helped the Spanish Republicans in a failed 1936 Soviet assault near Toledo, 30 km from Madrid.[1]

When Molotov claimed in radio broadcasts that the Soviet Union was not dropping bombs but rather delivering food to the starving Finns, the Finns started to call the air bombs satirically "Molotov bread baskets". Soon they responded by saluting the advancing tanks with "Molotov cocktails." At first the term was used to describe only the burning mixture itself, but the term was soon applied to the combination of both the bottle and its contents. This Finnish use of the hand- or sling-thrown explosive against Soviet tanks was repeated in the subsequent Continuation War. Molotov cocktails were eventually mass-produced by the Finnish military, bundled with matches to light them.

These weapons saw widespread use by all sides in World War II. They were very effective against light tanks, and very bad for enemy morale. The following is a first-hand description of their effects, written during the Warsaw Ghetto Uprising in 1943:

The well-aimed bottles hit the tank. The flames spread quickly. The blast of the explosion is heard. The machine stands motionless. The crew is burned alive. The other two tanks turn around and withdraw. The Germans who took cover behind them withdraw in panic. We take leave of them with a few well-aimed shots and grenades.[2]

During the 1948 Arab–Israeli War, members of the Israeli Kibbutz Degania managed to stop a Syrian tank assault by using Molotov cocktails. They were frequently used against Soviet tanks with great efficiency in the Hungarian Revolution of 1956.

The weapon has been used against tanks effectively because of the conformation of parts of tanks, particularly around the undersides and fuel tank "entrances". A Molotov cocktail could blow up the fuel tank, destroying the machine, particularly for older (before 1940) tank models. Molotov cocktails are much more effective against gasoline engines than diesel engines' tanks. This is because diesel has a high flashpoint of 64 °C – making it more difficult to ignite compared to petrol. Some Soviet tanks actually had an entry to the gas tank on the side of the vehicle, which could be opened by combatants in close quarters, letting out the highly flammable liquid and making destruction of the tank even easier. Note that these tactics were only effective due to the advantage guerrillas had in close quarters; tanks can barely maneuver in such conditions and are not able to counter quick-moving enemies armed with incendiary bombs.

Petrol bombs were widely used throughout the Troubles in Northern Ireland in riot situations, directed towards the RUC or the British Army. As well as occasional situations where they continue to be used against the PSNI and army, they are frequently used in sectarian attacks on homes and businesses by both communities. Fireworks and homemade grenades, known as blast bombs now commonly accompany petrol bomb attacks on the security forces.

Given the recent terrorism laws, such things could also fall under anti-terror legislation.

Molotov cocktails were put to use recently during the riotous 2005 civil unrest in France. Another situation with popularity for them is the Palestinian Intifada.

In Sydney, during the Cronulla Riots, rioters carrying Molotov cocktails were apprehended when they carried open bottles in a bus. The resulting smell of petrol alerted the driver, who in turn alerted the police.

During the Columbine High School massacre, the two gunmen built and threw several Molotov cocktails; however, none of them exploded. It is presumed that this was due to bottles being overfilled. [2]