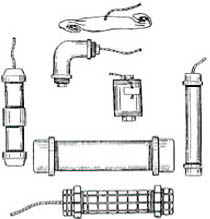 Different pipe bombs appearances, from a bomb awareness report by the US Department of State

A Pipe bomb is a kind of explosive bomb. It is made from a pipe filled with an explosive material.

In many countries making or having a pipe bomb is a serious crime.