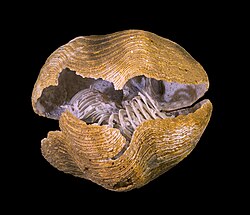 Brachiopods filter plankton, using a specialized organ: the lophophore. It is exceptional to find silicified skeletons of this organ. You can see it in this specimen of Liospiriferina from the Jurassic

Brachiopods with beak-shaped hinges, from the Philippines

Brachiopods are a phylum of small marine shellfish, sometimes called lampshells. They are not common today, but in the Palaeozoic they were one of the most common types. They lived near the shore (littoral zone), but now they have been pushed into deeper water by competition from bivalve molluscs.

At their peak in the Palaeozoic era the brachiopods were among the most abundant filter-feeders and reef-builders, and occupied other ecological niches, including swimming in the jet-propulsion style of scallops. Brachiopod fossils have been useful indicators of climate changes during the Paleozoic era.

They do look rather like bivalves, but their internal organisation is quite different.[1][2] Their mostly calcium carbonate shells or "valves" have upper and lower surfaces, unlike the left and right arrangement in bivalve molluscs. Brachiopod valves are hinged at the rear end. The front can be opened for feeding or closed for protection.

Two major groups are recognized, articulate and inarticulate. Articulate brachiopods have toothed hinges and simple opening and closing muscles, while inarticulate brachiopods have untoothed hinges and a more complex system of muscles used to fit the two halves together. In a typical brachiopod a stalk-like pedicle projects from an opening in one of the valves (the pedicle valve). Its function is to attach the animal to the seabed but clear of silt that would obstruct the opening.

Brachiopods have a huge fossil record going back to the Cambrian. They were much reduced by the two main extinction events, the P/Tr and K/T. Bivalve molluscs took over their inshore habitats in the Mesozoic, and since then the brachiopods have been confined to deeper water, except for a handful of species. There are about 100 to 350 species living; the fossil species number 12,000.

Lingula, one of the oldest genera of brachiopods, has survived from the earliest Ordovician to the present day. The various species look very similar, and the genus is a good example of a living fossil.

Brachiopod classification is being debated by invertebrate palaeontologists. 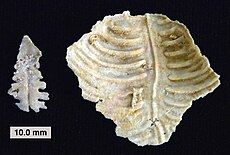 Leptodus americanus, an index fossil from the Permian period. It has very asymmetrical valves.