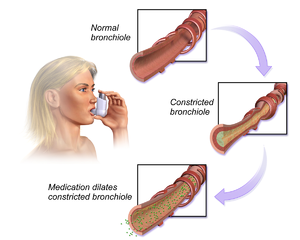 A bronchodilator is a substance that dilates (opens up) the bronchi and bronchioles which increases airflow to the lungs.[1] Bronchodilators may be endogenous (originating naturally within the body), or they may be medications taken to treat breathing difficulties. They are most useful in obstructive lung diseases. Asthma and chronic obstructive pulmonary disease are the most common such conditions. They are also used to treat respritory blockages that usaully occur when you have the common cold. They are well prescribed by doctors and are really common in house holds. Although this remains somewhat controversial, they might be useful in bronchiolitis and Bronchiectasis.They are often prescribed but of unproven significance in restrictive lung diseases.

Bronchodilators are either short-acting or long-acting.[2] Short-acting medications provide quick or "rescue" relief from acute bronchoconstriction.[2] Long-acting bronchodilators help to control and prevent symptoms. They are used along with inhaled steroids for control of asthma symptoms on a long-term basis.[2] The three types of prescription bronchodilating drugs are β2-agonists (short- and long-acting), anticholinergics (short-acting), and theophylline (long-acting).[3]

The bronchodilators are divided in short- and long-acting groups: