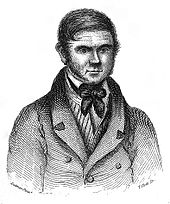 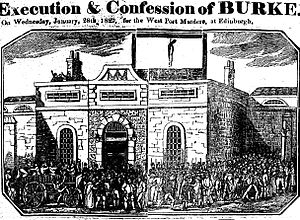 The execution of William Burke in the Lawnmarket, Edinburgh, 28 January 1829; from a contemporary broadsheet.

The Burke and Hare murders (or West Port murders) were serial murders in Edinburgh, Scotland, from November 1827 to 31 October 1828.

The murders were done by Irish immigrants William Burke and William Hare. They sold the corpses of their 17 victims to Dr Robert Knox. Knox was a Fellow of the Royal Society, and the Conservator of the Museum of Comparative Anatomy in Edinburgh. He was a teacher of human anatomy to Edinburgh medical students, so needed bodies for his students to dissect.

The murderer's accomplices included Burke's mistress, Helen McDougal, and Hare's wife, Margaret Laird.[1] From their method of killing their victims has come the word "burking", meaning to purposefully smother and, more generally, to quietly suppress.[2][3]

From 1826 to 1840 Knox ran Barclay's anatomy school in Surgeon's Square, Edinburgh. He was the most popular lecturer on anatomy in Scotland, but his class were always short of bodies to dissect.

Before the Anatomy Act of 1832 widened the supply, the only legal supply of corpses for anatomical purposes in the UK were those condemned to death and dissection by the courts. This led to a shortage of legitimate subjects for dissection. The shortage became more serious as the need to train medical students grew, and the number of executions fell.

In his school Knox ran up against the problem from the start, since – after 1815 – the Royal Colleges had increased the study of anatomy in the medical curriculum. If he taught according to what was known as ‘French method’ the ratio would have had to approach one corpse per pupil. As a consequence, body-snatching became so common that it was not unusual for relatives and friends of someone who had just died to watch over the body before and after burial, to stop it being taken.

In November 1827 William Hare began a new career when an indebted lodger died on him by chance. He was paid £7.10/- (seven pounds & ten shillings) for delivering the body to Knox. Now Burke and his accomplice Hare set about murdering tramps and drunks on a regular basis. After 16 more transactions, in what became known as the West Port Murders, on 2 November 1828 Burke and Hare were caught. The whole city were convulsed with horror, fed by ballads, broadsides and newspapers, at the terrible deeds of Burke & Hare.[4] Hare turned King's evidence, and Burke was hanged, dissected and displayed.

Burke’s the butcher, Hare’s the thief,
Knox, the boy who buys the beef!

Knox was not prosecuted, which outraged many in Edinburgh. His house was attacked by a mob, and windows were broken. A committee of the Royal Society of Edinburgh cleared him of blame, but there was no forgetting his part in the case, and many were wary of him.[5]

The last victim was Marjory Campbell Docherty. Burke lured her into the lodging house by claiming that his mother was also a Docherty. He had to wait to kill her because the lodgers James and Ann Gray were present. The Grays left for the night and neighbours heard the sounds of a struggle.

The next day Ann Gray, who had returned, became suspicious when Burke would not let her approach a bed where she had left her stockings. When the Grays were left alone in the house, they checked the bed and found Docherty's body under it. On their way to alert the police, they ran into McDougal who tried to bribe them with an offer of £10 a week. They refused.

Burke and Hare had removed the body from the house before the police arrived. However, under questioning, Burke claimed that Docherty had left at 7:00 a.m., while McDougal claimed that she had left in the evening. The police arrested them. An anonymous tip-off led them to Knox's classroom where they found Docherty's body, which James Gray identified. William and Margaret Hare were arrested soon there after. The murder spree had lasted twelve months.