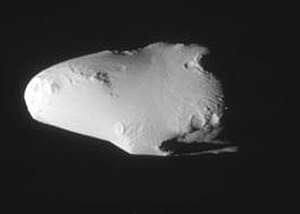 Calypso is a small moon of Saturn. It was discovered by a few astronomers in 1980, based on observations from the Earth. It is named after Calypso in Greek mythology. Calypso is a Trojan moon, as it orbits together with larger moon Tethys. It orbits behind Tethys by 60 degrees in its orbit around Saturn. Telesto is another moon which shares Calypso's orbit. Calypso was named after Calypso, a nymph in Greek mythology.