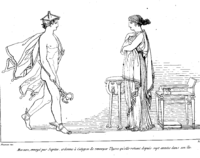 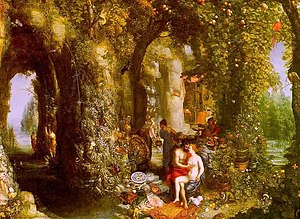 A Fantastic cave with Odysseus and Calypso is a painting by Jan Brueghel the Elder. It was done about 1616

Kalypso or Calypso is a nymph in Greek mythology, who lives on the island Ogygia. Calypso was the daughter of Atlas.

In the Odyssey, the hero Odysseus comes to her island after escaping from the sea, and the death of his men. Odysseus stayed with her for seven years. But then the god Hermes came and told her that the gods said that she had to let Odysseus go. Calypso promised Odysseus immortality (that he would live forever) if he stayed, but he wanted to go back to his wife Penelope, and so he left her. She can be seductive at times.